Fine Wine Source is a specialty wine shop rooted in the idea that every wine has a story. It is our passion to tell you that story, and help you understand the heart and soul of each bottle. Whether you are uncorking a delicate Grand Cru Burgundy or a simple Chianti Classico, we want you to realize the artistry in each and every bottle. We love what we do, and we want to share our passion with you!

At FWS, we are unlike most wine stores in the area; all we do is wine, and we like it that way! We are a small wine shop in Livonia, but we guarantee the best wines in the area. Each wine on the shelf has been hand-selected, tasted, and then placed on the shelf by one of the FWS team members. If we don’t have what you are looking for, we will find it! Ask us about anything you see, and we would be thrilled to share stories about the wine, why we like it, and why it is in our store.

For almost 30 years, Fine Wine Source has been servicing Metro-Detroit wine lovers. Owners Jim and Livvie Lutfy have been able to change with the times, adapting to the economic downturn, and revolutionizing the store. Years ago, we sold only extremely rare and expensive wine, but we now offer a wide variety of wines at every price point. 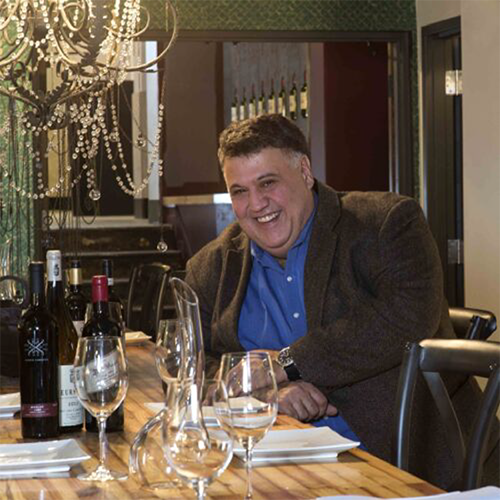 Jim Lutfy started selling wine from his family’s small business, called Cloverleaf Market, over 35 years ago. Here at Cloverleaf, he was recognized by several publications including Market Watch Magazine/ Wine Spectator Magazine, Detroit Free Press, and Crain’s Detroit Business as an industry leader in the retail wine business throughout the country. He attended Oakland University until his father had
a health-scare, and he started work full-time at the market. At Cloverleaf, he developed a wine program that was unique to the state; he was a merchant that went after the market’s high end. He decided to create an environment that would beat the competition every time when it came to personal service and knowledge about wine.

Jim and Livvie are so devoted to wine and spirits, they named their daughters, Remy and Margaux, after their favorite cognac and French wine, and their dog Piper, after champagne. Livvie became interested in wine after meeting Jim, and realizing the love-affair he had with the artform. Livvie has since worked at the store, helping with day-to-day operations and expanding marketing efforts.

In 1993, Jim moved his business to Livonia, opening The Fine Wine Source. Here he continues to spread the word about wine to his loyal customers. Jim and Livvie have an amazing team that includes Igor and Dare. Each member brings something special to the table and is able to promote different aspects of the business.