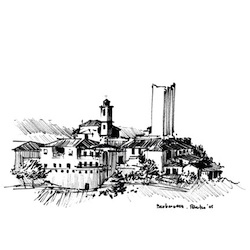 The Story: “My father is the youngest son of Natale and Teresa Vacca. Our family has lived in this region for generations. Like many families in the Langhe, we speak Piemontese as our first language and Italian second. Some of the grapevines we manage today were planted 70 years ago by my great grandfather.-Renato Vacca winemaker & owner Cantina del Pino

Domizio Cavazza was the director of the Royal Enological School in Alba from 1888 – 1913. When he arrived he surprised everyone by purchasing land and making his home in Barbaresco. The noble families expected he would reside near the more famous estates in Barolo.

He purchased the Ovello cascina (farmhouse and land) and he began making wine. For the first time the wine made from the nebbiolo vineyards surrounding the village was called Barbaresco. For the people of this area it was a huge compliment. Cavazza was very charismatic and an outspoken supporter of the farmers in the Langhe.

Cavazza celebrated the birth of his first son by planting what became a well-known landmark in the region, a large Mediterranean pine tree. The estate began to be known as the ‘cascina del pino’ or winery of the pine. Renato Vacca’s great grandfather purchased the vineyards after Sig. Cavazza prematurely died and his family moved to Torino. The Vacca family has been here ever since.

Location: Cantina del Pino is located in a part of the Piedmont Region called the Langhe where some of Italy’s most famous wines are produced.

Barbaresco sits high above the Tanaro river where wine grapes grow alongside truffles, hazelnuts and chestnuts and some of the most famous cheeses can be found. This area boasts nine Michelin starred restaurants and countless family run trattorias and nearby accommodations range from the luxurious to apartment based farm houses called agritourismos.

Cantina del Pino is just one hour from Torino and situated in a unique area an equal distance to the Mediterranean and the part of the Alps that separate Italy and France.The mountains provide not just majestic views but also a protection from severe weather throughout the year.

Vineyard: Known since the 14th century, the grape variety Piquepoul has always been synonymous with quality. The production is limited to 1200 hectares in the appellation and makes the PicPoul de Pinet a rare region.

Tasting Notes: The Cantina del Pino Dolcetto has splendid perfume with ruby and garnet colors with finesse and an intense and interesting nose…with jammy flavor and a hint of black pepper and soft background of mineral.

Jim Lutfy’s thoughts: “Rich, creamy, intense layers of flavors and dried cherries. With a long lingering harmonious finish, this wine is a stunner! This Dolcetto is incredible! Best served with meats on the grill! I know you will enjoy!”-JL